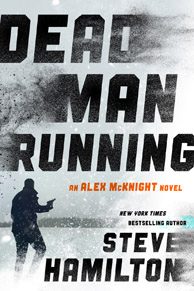 On the Mediterranean Sea, a vacationer logs on to the security camera feed from his home in Scottsdale, Arizona. Something doesn’t look right. Rewinding through the feed, he sees an intruder. When he shifts to the bedroom camera, he sees the dead body.

A trap is set, and the man they catch – a deranged loner named Lawrence T. Livermore – is charged with the murder. It’s apparently the fifth young woman he has killed. But then Livermore gives the FBI some stunning news: Number 6 is still out there. Alive. He’ll take them to her on one condition: a former Detroit cop comes along.

To Alex, living two thousand miles away in Paradise, Michigan, Livermore is a stranger.  He can’t remember encountering him as a cop, can see no connection to this man whatsoever – but he agrees to accompany the search party to a remote desert canyon. And here the worst nightmare of Alex’s life begins.

Alex will now be forced to chase this killer through the shadows in a desperate race against the clock, across the country and to the edge of his limits, until he finally uncovers the one secret from his own past that binds them together – and cuts closer to home than he ever could have imagined.