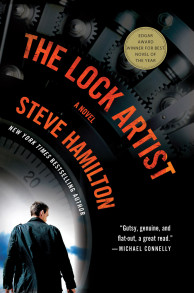 “I was the Miracle Boy, once upon a time. Later on, the Milford Mute. The Golden Boy. The Young Ghost. The Kid. The Boxman. The Lock Artist. That was all me.

But you can call me Mike.”

Marked by tragedy, traumatized at the age of eight, Michael, now eighteen, is no ordinary young man. Besides not uttering a single word in ten years, he discovers the one thing he can somehow do better than anyone else. Whether it’s a locked door without a key, a padlock with no combination, or even an eight-hundred pound safe … he can open them all.

It’s an unforgivable talent. A talent that will make young Michael a hot commodity with the wrong people and, whether he likes it or not, push him ever close to a life of crime. Until he finally sees his chance to escape, and with one desperate gamble risks everything to come back home to the only person he ever loved, and to unlock the secret that has kept him silent for so long.

“Hypnotic … A proven master of suspense moves in a brand new direction – and the result is can’t-put-it-down spectacular.”
– Lee Child

“I haven’t read a book this captivating in a long time. The Lock Artist is gutsy, genuine and, flat out, a great read. You won’t be disappointed.”
– Michael Connelly

Locked Up Tight For Another Day

You may remember me. Think back. The summer of 1990. I know that’s a while ago, but the wire services picked up the story and I was in every newspaper in the country. Even if you didn’t read the story, you probably heard about me. From one of your neighbors, somebody you worked with, or if you’re younger, from somebody at school. They called me “the Miracle Boy.” A few other names, too, names thought up by copy editors or newscasters trying to outdo one another. I saw “Boy Wonder” in one of the old clippings. “Terror Tyke,” that was another one, even though I was eight years old at the time. But it was the Miracle Boy that stuck.

I stayed in the news for two or three days, but even when the cameras and the reporters moved on to something else, mine was the kind of story that stuck with you. You felt bad for me. How could you not? If you had young kids of your own back then, you held them a little tighter. If you were a kid yourself, you didn’t sleep right for a week.

In the end, all you could do was wish me well. You hoped that I had found a new life somewhere. You hoped that because I was so young, somehow this would have protected me, madeit not so horrible. That I’d be able to get over it, maybe even put the whole thing behind me. Children being so adaptable and flexible and durable, in ways that adults could never be. That whole business. It’s what you hoped, anyway, if you even took the time to think about me the real person and not just the young face in the news story.

People sent me cards and letters back then. A few of them had drawings made by children. Wishing me well. Wishing me a happy future. Some people even tried to visit me at my new home. Apparently, they’d come looking for me in Milford, Michigan, thinking they could just stop anybody on the street and ask where to find me. For what reason, exactly? I guess they thought I must have some kind of special powers to have lived through that day in June. What those powers might be, or what these people thought I could do for them, I couldn’t even imagine.

In the years since then, what happened? I grew up. I came to believe in love at first sight. I tried my hand at a few things, and if I was any good at it, that meant it had to be either totally useless or else totally against the law. That goes a long way toward explaining why I’m wearing this stylish orange jumpsuit right now, and why I’ve been wearing it every single day for the past nine years.

I don’t think it’s doing me any good to be here. Me or anybody else. It’s kind of ironic, though, that the worst thing I ever did, on paper at least, was the one thing I don’t regret. Not at all.

In the meantime, as long as I’m here, I figure what the hell, I’ll take a look back at everything. I’ll write it all down. Which, if I’m going to do it, is really the only way I can tell the story. I have no other choice, because as you may or may not know, in all the things I’ve done in the past years, there’s one particular thing I haven’t done. I haven’t spoken one single word out loud. That’s a whole story in itself, of course. This thing that has kept me silent for all of these years. Locked up here inside me, ever since that day. I cannot let go of it. So I cannot speak. I cannot make a sound.

Here, though, on the page… It can be like we’re sitting together at a bar somewhere, just you and me, having a long talk. Yeah, I like that. You and me sitting at a bar, just talking. Or rather me talking and you listening. What a switch that would be. I mean, you’d really be listening. Because I’ve noticed how most people don’t know how to listen. Believe me. Most of the time they’re just waiting for the other person to shut up so they can start talking again. But you… Hell, you’re just as good a listener as I am. You’re sitting there, hanging on every word I say. When I get to the bad parts, you hang in there with me and you let me get it out. You don’t judge me right off the bat. I’m not saying you’re going to forgive everything. I sure as hell don’t forgive it all myself. But at least you’ll be willing to hear me out, and in the end to try to understand me. That’s all I can ask, right?

Problem is, where do I begin? If I go right to the sob story, it’ll feel like I’m already trying to excuse everything I did. If I go to the hardcore stuff first, you’ll think I’m some sort of born criminal. You’ll write me off before I get the chance to make my case.

So maybe I’ll kind of skip around, if you don’t mind. How the first real jobs I was involved with went down. How it felt to be growing up as the Miracle Boy. How it all came together that one summer. How I met Amelia. How I found my unforgivable talent. How I got myself heading down the wrong road. Maybe you’ll look at that and decide that I didn’t have much choice. Maybe you’ll decide that you would have done exactly the same thing.

The one thing I can’t do is start off on that day in June of 1990. I can’t go there yet. No matter how hard other people have tried to convince me, and believe me there were a lot of them and they tried pretty damned hard… I can’t start there because I already feel claustrophobic enough in here. Some days it’s all I can do to keep breathing. But maybe one of these days as I’m writing, I’ll get to it and I’ll think to myself, okay, today’s the day. Today you can face it. No warm-up needed. Just go back to that day and let it fly. You’re eight years old. You hear the sound outside the door. And-

I had to take a little break, get up and walk around a little bit, which around here isn’t very far. I left the cell and walked down through the common area, used the main bathroom and brushed my teeth. There was a new guy in there, someone who doesn’t know anything about me yet. When he said hey to me, I knew I had to be careful. Not answering people might be considered rude on the outside. In here, it could be taken as disrespect. If I were in a really bad place, I’d probably be dead by now. Even in here, in this place, it’s a constant challenge for me.

I did what I usually do. Two fingers of my right hand pointing to my throat, then a slashing motion. No words coming out of here, pal. No disrespect intended. I obviously made it back alive because I’m still writing.

So hang on, because this is my story if you’re ready for it. I was the Miracle Boy, once upon a time. Later on, the Milford Mute. The Golden Boy. The Young Ghost. The Kid. The Boxman. The Lock Artist. That was all me.

But you can call me Mike.